Pontfadog beekeeper and much in-demand breeder of the hardy native British Black Honeybee, Kirsty Williams, is a woman on a mission determined to educate a new generation of beekeepers. 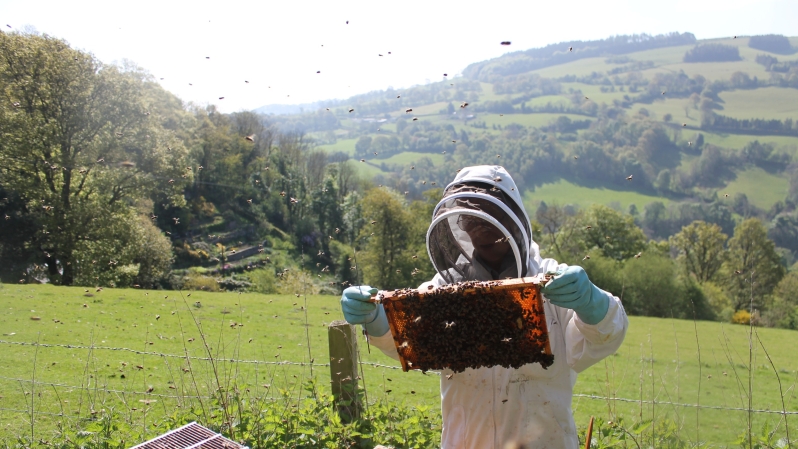 Kirsty Williams is almost as much a force of nature as the native British Black Honeybee this Pontfadog-based beekeeper breeds for a living. Terribly gungho and jolly hockey sticks, Kirsty’s passion and enthusiasm for all things country is as legendary as her battered, beloved old Landrover.

‘The Lanny’ as it is known to a generation of Pontfadog children who’ve clung onto the back of it, or ridden atop its roof on the way up the lane to her big old farmhouse, is as much a part of the Pontfadog scene as the river, the old oak, the pub. In autumn, you’ll see pheasants from the shoot draped across its bonnet. In summers of old, hordes of small children rode gleefully from anywhere there was a handle to hang onto. Summers these days, sees the old workhouse used for ferrying new frames, hives and bee stocks up and down the valley where Kirsty has 10 apiaries in sites stretching from Chirk Castle all the way up to Llanarmon.

In peak summer season she is indeed, a busy bee herself. “My aim is to expand the 60 hives I have in the valley. But I don’t want to create too much competition with the wild bees for forage, so I’m always on the lookout for suitable sites,” she says earnestly.

There’s something about Kirsty Williams’ deep understanding and respect for nature that is incredibly endearing and engaging. The cut glass Mallory Towers accent gives her something of an air of popular Head Girl but belies an earthy groundedness; to her absolute core she is a simple country lass who understands the ebb and flow of the seasons and how all the elements align, connect, impact, affect.

Kirsty has been keeping bees in the Ceiriog Valley since 1989. “It’s an amazing location for bees,” she beams. “Everything about it fits; the trees, hedges and verges, farmers who manage their farms in good old-fashioned ways and practice rotation.

“There are plenty of wildflower meadows with rich foraging opportunities and there’s an abundance of heather up on the tops at Y Foel, which the bees love.” Heather honey is a very valuable resource for bees, Kirsty goes on to explain and reveals that Llanarmon, Nantyr and Vivod offer particularly good heather spots for this high in protein food source.

“The rich heather source here is one of the main reasons my bees winter so well. The heather flowers in August, which is really valuable as they forage like mad then and the frames are soon dripping with honey. I’m sensible about how much honey I extract. I leave them plenty to help carry them through the winter. And it also means I don’t have to feed them with a sugar syrup solution to see them through to the spring.” 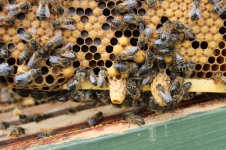 The native (or as near damn native as it is possible to be) British Black Honeybee is a far hardier beast than those imported from Mediterranean countries like Greece and Italy. “The British Black Honeybee is far more prudent with its stores over winter than its Continental cousins,” she explains. A Scot by birth, Kirsty appreciates frugality. “Bees imported from Australia and New Zealand, and those from Southern Mediterranean countries tend to be greedy, and profligate and will gobble up their stores when it gets cold with little heed to seeing out the winter.”

“My bees are more resilient to cold weather, much more frugal and shrewd. As a result, they winter far more successfully.” 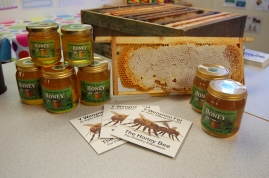 This serendipitous collision of nature, nurture and Nantyr means Kirsty’s brilliant bees produce a multitude of frames dripping with delicious, golden honey, which she presses and then sells in 1lb and 1/2lb jars in local shops including Pontfadog Post Office, Chirk Trout Farm, McArdle’s butchers and the health food store, Honeysuckle in Oswestry. She also cuts honeycomb for those who prefer their honey that way.

With an eye on the future, Kirsty is involved in mentoring beekeepers across the valley and has helped set up beekeeping clubs at local schools including Moreton Hall and St
Christopher’s in Wrexham. She filmed an educational DVD for primary schools with the help of an independent film-maker and old friend, Gilly Lee, which was supported by Menter y Môn.

An emerging collaboration with Alma Pierson and Carole Cogan at The Old Cowshed in Dolywern has seen her launch a natural beeswax food wrap. She hopes to create more beeswax products soon. But her abiding passion is breeding.

Kirsty’s mentoring service is free in the first year for anyone who buys her bees and she charges just £20 per hour for expert guidance thereafter. “Mentoring and advice is so important for those new to beekeeping,” she explains. “It’s especially crucial in that first year when you need to know how to identify the queen, what measures to take to prevent the bees from swarming and how to treat the varroa mite, which can devastate hives and have a knock-on effect on the wild bee population,” she warns.

Time spent in the company of Kirsty Williams leaves you delighting in the wonders of nature and the circle of life, in thrall to her knowledge and expertise and in total awe of our brilliant British Black Honeybee.